If you want a fresh perspective on things, and to have fun, get some old high school friends together to play golf.  Note: this works to best effect when none of you is a good golfer. 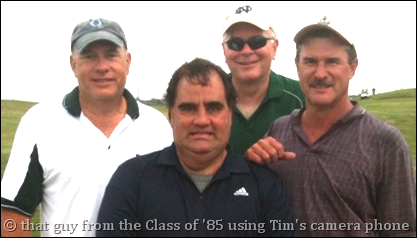 That’s us—Tim, Pascal, Tom and Pat—on the 18th tee at Wildcat Golf Club’s Lakes Course, just before it rained, during our high school reunion golf outing earlier this month.  The rain was brief but we were already wet from the inside out anyway.  We ended up eight over par, which is distressingly poor in a scramble.  And we had a great time—what would you expect when you spend the day with friends you’ve had for almost 40 years?

I have assiduously avoided high school reunions since number 10, when I went to a Houston Astros game because I’d never been in the Skyboxes at the Astrodome…and as expected, found that a seat at the top of a ten story building is less than ideal for baseball watching if you’re at all interested in the game.  But that’s not why I skipped reunions; I was just never interested.  This time, I kiddingly replied that I’m always up to play golf, and someone called me on it.  Good on them…better for me.

I’ve been friends with these guys, and a couple of others, since we were freshmen in high school, and I never needed a reunion to find out how they were doing.  We don’t all see each other regularly, but it’s the kind of friendship where you can pick up a conversation that was put on hold months and months before.  And so we spent the afternoon, scuffing around the course, amusing one another with pathetic displays of athletic ability and laughing at all the old jokes, and all the old jokers.

It made me feel great to realize that I’ve got these these guys in my life, that we’re still comfortable around each other despite the years.

The four of us went out to eat together afterward because we’re all still growing boys (just not growing vertically any more).  We watched a ball game on TV and drank beer (that was mostly me) and later told the old jokes and talked about what’s new, and learned some things about one other, even after all these years.

After I got home, it got better.  My friend Mark—the guy I play golf with regularly, the guy who joined me to scout Wildcat since none of us had played it before; the guy who gave me his copy of “Golf in the Kingdom”—had wished me “Tempo and Short Grass” in an e-mail that included this:

I sent the Soundtrack of the Day along to my old friends so they could share that part of my day, too.

The Southeast Asian character who said that in a television show that’s stuck in a dusty corner of my memory—maybe a “M*A*S*H” episode?—got away with this funny line it because (1) she wasn’t a native English speaker and (2) it was the 1970s, excuses not available to the people who write and edit our newspapers and television newscasts today.

Last week  in The Washington Post Gene Weingarten lamented the death of English at the hands of journalists, the people you might have imagined should know how to properly use the tool that has expedited our exchange of information ever since evolution stole our ability to do that task with a simple sniff.

The end came quietly on Aug. 21 on the letters page of The Washington Post.  A reader castigated the newspaper for having written that Sasha Obama was the “youngest” daughter of the president and first lady, rather than their “younger” daughter.  In so doing, however, the letter writer called the first couple the “Obama’s.”  This, too, was published, constituting an illiterate proofreading of an illiterate criticism of an illiteracy.  Moments later, already severely weakened, English died of shame.

You in the hinterlands, do not take solace imagining that the plague is restricted to Our Nation’s Capital…oh no:

The Lewiston (Maine) Sun-Journal has written of “spading and neutering.”  The Miami Herald reported on someone who “eeks out a living” — alas, not by running an amusement-park haunted house.  The Fredericksburg Free Lance-Star described professional football as a “doggy dog world.”  The Vallejo (Calif.) Times-Herald and the South Bend (Ind.) Tribune were the two most recent papers, out of dozens, to report on the treatment of “prostrate cancer.”

The demise of the language has not happened in a vacuum: readers supplied Weingarten with some of the more irksome examples they have stomached:

Although regrettable, the slaying of the language by those who (arguably) should know better isn’t that much of a surprise.  These are the same people who, for instance, recently accepted the explanation from golfer Erica Blasberg’s doctor that he removed the suicide note and pill bottle from the scene of her suicide to save her family embarrassment without asking why he didn’t remove the plastic bag that was tied over her head, and who showed “dramatic video” shot from on board a Coast Guard helicopter of a rescue at sea without ever explaining why the boat was still speeding across the surf!

Got an excellent example of egregious and excess execution of English?  Hit the comment button and share with the class.

Why, the day they start to show new episodes of television series, of course!  It’s like Christmas without the lines or the bills or the lamenting about what to get everybody on the list because there’s something for everyone.  There are new stories from old favorites, and there are new offerings you can try for free without any down payment beyond your time. 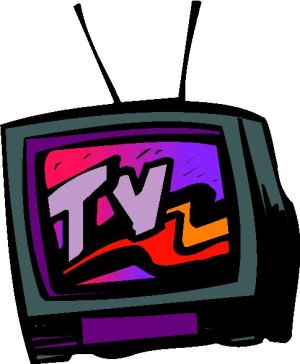 Now, if you’re a Scrooge afoot in the land of TV, just go read a book and don’t bother the rest of us.  I’m not saying it’ll all be great, or even that much of it will be worthwhile.  But right now, it’s all shiny and full of possibility.  Still, I keep these precepts in mind:

Television can teach.  It can illuminate.  Yes, it can even inspire. But it can do so only to the extent that humans are determined to use it to those ends.  Otherwise, it is merely lights and wires in a box.  (Edward R. Murrow)

Imitation is the sincerest form of television.  (Fred Allen)

Time for the first show–see you later.

Cinderella story, comin’ outta nowhere…when you don’t expect it but can really use the boost:

It just so happens that it was a Princeton professor’s column which reminded me today that it was a Texan who stood up and declared to the world with crystal clarity nine years ago that the United States was at war, but not against a religion or its believers:

“The face of terror is not the true faith of Islam.  That’s not what Islam is all about.  Islam is peace.  These terrorists don’t represent peace.  They represent evil and war.”

I fervently hope that we all remember that, and not take the easy course of venting pain and frustration on innocents who offer a convenient target.  Quite a few leaders from across the spectrum did speak up in defense of American values last week, to their everlasting credits.

Like a small group in Amarillo did on Saturday: when one of their neighbors decided to take up the cross of Quran burning (pardon the mixed metaphor), they responded with quick show of civil ingenuity:

"Any time you burn books, that’s ignorant," Danielson said.  "For us to burn their religion is showing hate."

Protesters threw their hands on the grill Grisham planned to use to burn the Quran, someone took his lighter and Isom stole the Quran, leaving him with just lighter fluid.

The would-be book burner went on about his business, the local imam offered the address of his mosque so anyone who was interested could come on by, and that was that.  Another lazy Saturday in Texas…gotta love it.

Just two quick notes on what Tunku Varadarajan cleverly calls the “belligerent unenlightenment” of a portion of the American population:

First, the former assistant manager editor at The Wall Street Journal points out that it could be worse:

I am less worried by the fact that a fifth of the inhabitants of this great country believe that Obama is Muslim than by the fact that 60 percent of them are unwilling, or unable, to accept the scientific basis of evolution….Political bias can be a fleeting sickness; profound ignorance, on the other hand, can be incurable.

And second, because it’s just too damn funny not to share, a peek at what one columnist in Great Britain (a friend from an earlier post on a different subject) has to say on the topics of 5600 foot tall mosques, spatial relationships, and trespassing at Buckingham Palace.

According to a recent poll, one in five Americans believes Barack Obama is a Muslim, even though he isn’t.  A quarter of those who believe he’s a Muslim also claimed he talks about his faith too much.  Americans aren’t dumb.  Clearly these particular Americans have either gone insane or been seriously misled.  Where are they getting their information?