If you gave this backstory to a character in a novel it would be justifiably criticized for being unbelievable, too over the top:

An East Coast child of Ivy League privilege, son of a U.S. senator, postpones college to enlist in the Navy and gets shot down over the Pacific and dramatically 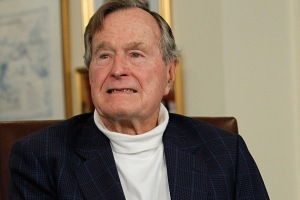 rescued on film but serves through until the end of the war, then goes to Yale where he is the captain of the baseball team and graduates Phi Beta Kappa with a degree in economics in just two and a half years before taking his wife and growing family to West Texas and making his fortune in the oil business before running for office and becoming the first Republican to represent Houston in the U.S. House; and after he loses a run for the Senate his party calls on him to be the U.S. ambassador to the United Nations, and then during the Watergate crisis the national party chairman, and then the chief liaison to Communist China, and then the director of the CIA; and when he runs for president but loses in the primaries, the guy who wins the nomination picks him as his vice president and he serves eight years as VP before winning the White House on his own and presiding over the end of the Cold War; and then he turns his attention to an international non-profit organization trying to solve social programs through the promotion of voluntary service to others.

But it’s all true.  And today, George Bush turns 90 years old.  Despite the fact that he’s pretty much wheelchair-bound these days he celebrated with a tandem parachute jump (pictures included!) this morning before hosting a party for 200 that will feature Irish tenor Ronan Tynan.

The man is still a great example, perhaps especially to young people “who weren’t even born when he left office” and who are disenchanted with the American political system.

It starts with what Bush said to a group of young people in one of the last speeches he gave as President: “What all of us seek in our life is meaning and adventure. It’s through service that all of us can find both.”

Mary Kate Cary, a former Bush White House aide and the executive producer of a film about Bush that airs on CNN (twice) this Sunday, June 15, gives us a taste of what some prominent folks have to say in her film about Bush and his legacy of doing for others, and for the right reasons.

What I have to say is, thank you.  And, happy birthday!