Any system that tries to make candidates for public office come together in one place to talk about what they intend to do if elected is a positive for civic discourse. This week the two major party candidates for president of the United States met on a stage in Denver to talk about domestic issues and that meant, mostly, our country’s economy. They kinda sorta agreed that the fiscal situation is bad and something should be done, and yet the only thing we clearly remember out of the exchange is a lame crack about Big Bird? This is why we have a problem.

Our government’s fiscal affairs are a mess, but the only talk that gains any traction is about something that doesn’t really make a difference. Business columnist Loren Steffy calls it the Big Bird Syndrome, “when politicians imply they will fix the country’s massive fiscal problems by eliminating what amounts to chicken feed in federal spending.” Even though we all agree that a federal deficit exceeding $1 trillion must be reduced—for our own good—the people sucking around for our votes are too afraid of losing support to be serious and specific about how they propose to solve the problem. So they tentatively nibble around the edges:

Perhaps we need to cut these programs because they’re inefficient or we don’t believe government should fund them or we simply don’t like them. But as a deficit reducer, it’s like throwing a few grains of sand over the rim of Grand Canyon and saying you’re fighting erosion.

There are thousands of variables in this equation—spending programs, entitlements, tax rates, deductions, exemptions—and the Simpson-Bowles Commission did a great job envisioning how they might all be leveraged to make progress in reducing the deficit. That framework is still over there on the shelf waiting to be tried if anyone is interested…in Denver both candidates “praised the deficit-cutting framework” without “embrac[ing] the politically unpopular choices” it offered. (What, were the politically popular choices already taken?)

The U.S. government budget works the same as your personal budget and mine; it’s on an entirely different scale, but the basic principles are consistent. From time to time your family and mine spend more than we make, just like Washington, and it’s not always a bad thing: that’s how we pay for houses and cars and educations for our children, for disaster relief and war mobilization. But when we do it as a matter of course, as a way to pay for the “nice to haves” in our lives, and do it over and over for a long enough time, it pushes us into a pit that is damn hard to climb out of.

In that pit, we spend more and more of whatever money we make to repay the interest on the money we borrowed to buy the things we couldn’t afford but thought would be nice to have as well as the borrowed money itself. As the percentage of our income required to pay for the borrowing gets larger, the percentage available to pay for today’s needs gets smaller, and if we don’t reduce our spending to match the available income we have to borrow more to keep up. If there’s no increase in income, or no reduction in expenses, the process repeats and repeats and we spin further and further into debt. This is how banks and credit card companies and loan sharks get rich.

Paying back the loans is hard. Assuming you have no lottery windfall, it probably means doing without or with less for a while (but after you pay back the loan you have more money to spend on what you need or what you want or to save for future spending). That’s not to advocate for trying to pay off the entire national debt right away, but we can’t keep having such a high percentage of our income committed to paying interest—that keeps us from paying for other things that we decide are worth doing, or from reducing the tax burden (hey, how about that concept!). We can’t keep borrowing forever. Growth in the economy will contribute to more revenue without raising tax rates, but the economy isn’t growing fast enough today to make a dent.

This is still the most important issue facing the president and Congress, without exception. But I didn’t hear anyone on that stage in Denver suggest that you or me need to act like responsible adults and do the hard work that’s required: they have plans with lower tax rates (yeah!) and shrinking deficits (wowser!), with milk and cookies served all along the primrose path to solvency!!

They’re telling us what they think we want to hear. They believe we won’t vote for them if they tell us the truth: the economy is a sand castle near the water’s edge, and the tide is coming in…we all have to pitch in, sacrifice some, to protect and strengthen its foundation before the damn thing collapses of its own weight. And, they vaguely promise they have the road map to a solution, and drop only subtle hints about the condition of the road we’ll have to take to get there.

The next two “debates” between the candidates for president and vice president offer another opportunity for some straight talk on this subject. We, and the people who’ll actually be doing the asking in Danville and Hempstead, should be insisting that they give it to us.

Since we last checked in with our heroes: Speaker Boehner, faced with his own proposal going down to defeat in the chamber he (ostensibly) leads, capitulated—he added a balanced budget provision to his plan for lowering government spending, reducing debt and raising the federal debt ceiling, to placate enough members to get the bill passed.  It worked; and as expected, and warned, the Senate rejected the plan; now Majority Leader Reid is trying to persuade Senate Republicans to let his plan come to a vote. [UPDATE 3:03 pm: The House rejected Reid’s plan before the Senate had a chance to vote on it.]

The Wall Street Journal editorial page wants Republicans to accept a plan now, and claim a victory, even if it’s one that doesn’t solve all the nation’s economic problems once and for ever.  (Why didn’t I think of that?)  An economy struggling to recover from recession doesn’t need the government to suddenly stop making some of its payments—and you can take comfort in knowing, there is a plan for who gets paid first in the event the debt ceiling is not raised by the deadline next Tuesday…the bureaucratic imperative prevails.

I still choose to believe that Congress may bring us to the edge of default but reason will prevail and the debt ceiling will be raised to prevent a default…that puts me in the company of an American conservative icon: 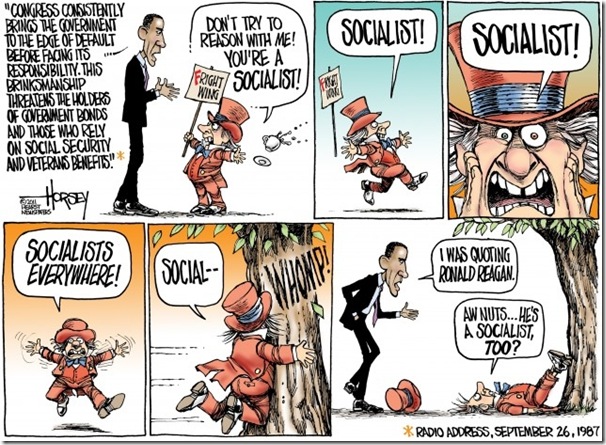 Thanks to David Horsey, seattlepi.com and Hearst Newspapers…click the cartoon to read Horsey’s commentary:

If it were not for their powerful recklessness, I would simply get a good laugh out of the alarmists on the right who see socialism in any tilt toward moderation in our politics.

To ensure that his country does not follow Greece into a bottomless hole of debt, Tory Prime Minister David Cameron has implemented a budget balancing formula of three-to-one – that is, three parts spending cuts to one part revenue increases. These austerity measures have, not surprisingly, provoked rioting among leftists and students. Nobody in Europe would be silly enough to call this socialism.

Yet, when President Barack Obama proposes the same formula to rein in the debt in the United States, a mental riot goes off in the heads of Rush Limbaugh, Sean Hannity, the House Republican Caucus, the Tea Party and all the others who are somehow convinced Obama wants to turn America into Sweden.

Consumed by their fear of phantom socialists, these folks see politics in stark, black-and-white terms. If you are not with ’em, you’re agin’ ’em  and even the most staunch conservative risks charges of treason if he shows a willingness to bargain with the other side.

Like ultra-conservatives of past decades, today’s reactionaries have scared themselves silly by demonizing their opponents: every liberal hates America, every Democrat is a socialist, every moderate is a dupe, every compromise is a pact with the devil. What is new is that this mindset now dominates the majority caucus in the United States House of Representatives. And because of that, there very well could be no deal to raise the debt ceiling, unless the president and the Senate choose to grant the militants everything they want.

…to confuse the centrist economic policies of Barack Obama with socialism is as absurd as calling a conservative like Tom Coburn a RINO – Republican In Name Only. As clean cut, moral and upstanding as my fellow citizens on the right may be, I have to say they have become unhinged from economic and political reality and, in their delusion, they are about to take us all over a cliff.

In a Newsweek interview, Tom Coburn, a guy I disagree with about most things, summed it up frightening well:

“We’ve never been in this territory before. I mean, if we handle this wrong, we’re near the end of our republic as we know it.”