It is rare, indeed, to witness an important moment in world history: I’m old enough that I saw man’s first step on the moon, 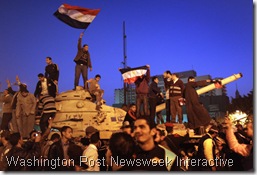 I saw the Berlin Wall fall (both on TV…thank you, TV), and today my old friend let me see an historic triumph of freedom and peaceful resistance to oppression in Egypt.   It’s an important reminder to us cynics to everyone about the power of ideas, and of the human spirit.  And like Gandhi and King and others taught, it shows that monumental change can be gained without resorting to violence.  How’s that taste, Al Qaeda?

I don’t know what’s going to happen next, but neither do the wingnuts who are certain that Muslim fundamentalists will soon be in power in Cairo.  Any assertion that Muslims, as a group, would rather live in a theocracy than a democracy is just flat wrong—as groups, Muslims and non-Muslims prefer democracy, and in virtually identical percentages.  Did hundreds of thousands of Muslims peacefully fill the streets of Cairo around the clock for the last three weeks to get out from under a secular dictator so they can submit to the whims of religious zealots?

Today the military is in charge in Egypt, and while on its surface “military assuming power from civilians” does seem to be the definition of “coup” this doesn’t feel that way.  It was the police that pushed back against the demonstrators in Cairo, but the army kept things from blowing up and seemed to be on the side of the people instead of the president.  The military leadership gives me the impression that even if they weren’t eager to see Mubarak go, they were smart enough to see that he couldn’t stay.  (And props to the protesters themselves for their patience and restraint after the disappointment of Mubarak’s Thursday speech when he said he wasn’t leaving; any other response might have forced the military to take another course.)

We shall see what comes next.  In the meantime, the old reliable Explainer at Slate has a very good list of answers to some nuts and bolts questions about what’s going on in Egypt.