I knew it:  I knew right away that whether or not there was any evidence that the person who shot Congresswoman Gabrielle Giffords was motivated by the loudmouths on radio and TV, that some of those loudmouths would be blaming the others for inciting political violence.  And I was right…I also predicted the sun would rise in the east this morning. 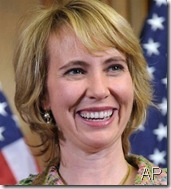 More than two days after the fact and there is no evidence (of which I’m aware) that the man who shot Giffords and [1/12, authorities have revised the figure to] 18 others was persuaded to lethal levels of violence by radio and TV stars; short of his declaration that “so-and-so said it was the right thing to do,” I don’t see that there ever will be.  So let’s leave that alone.

Starting with Sheriff Clarence Dupnik at Saturday’s news conference, there has been a lot of ink spilled calling for restraint, for throttling back the vitriol that fuels so much of the political discussion in our halls of government and our radio and television studios.  It is worth considering to what extent the personal viciousness—and the attendant self-satisfied smugness—of the professional politicians and the paid-to-be-controversial “opinion hosts” has created an environment where consideration of physical violence becomes less theoretical.

I’ve written about the tone of modern political discussion, which is clearly not intended to appeal to the intellect but to rouse the emotions and appeal to paranoia.  And I’m troubled by how successful those messengers and their messages are.

Sure, I’d like to see more restraint and less accusation in political speech, but I know that real world politics isn’t an academic debate.  And I agree with Jack Shafer’s insistence that there be no government-imposed restriction on political speech—the First Amendment makes clear that is not allowed.  (Check my We the People page for a collection of quotations on free expression.)

But I wish there was more self-control when it comes to speech intended to demonize political opponents: to say not just that someone’s position or opinion is wrong, but that those people are evil, or hostile to American ideals and virtues, because of what they believe.  Disagree with me?  Fine; argue my conclusion, dispute my facts, prove me wrong, ridicule my reasoning, do so with vigor; but to respond that my disagreement with your point of view is evidence of imbecility or treason is not a rebuttal.  It’s a sign of the weakness of your position; it’s a sign that you have nothing to say.

One of the more touching observances of a moment of silence for the victims of the shootings in Tucson came this morning from Giffords’ brother-in-law: NASA astronaut Scott Kelly, the current commander of the International Space Station.  (Full disclosure—I work at NASA Johnson Space Center and am acquainted with both Scott Kelly and his brother Mark Kelly, Giffords’ husband.)  The good stuff starts 1:27 into the clip–

We have a unique vantage point here aboard the International Space Station.  As I look out the window I see a very beautiful planet that seems very inviting and peaceful; unfortunately, it is not.  These days we are constantly reminded of the unspeakable acts of violence and damage we can inflict upon one another, not just with our actions but also with our irresponsible words.  We are better than this; we must do better.  The crew of ISS Expedition 26 and the flight control centers around the world would like to observe a moment of silence in honor of all the victims, which include my sister-in-law Gabrielle Giffords, a caring and dedicated public servant.  Please join me and the rest of the Expedition 26 crew in a moment of silence.

10 thoughts on ““We are better than this; we must do better””