We may all look at the same things, but it is the wise man or woman who really sees…in this case sees the hypocrisy so clearly, and explains it with such good humor that I imagine even the hypocrites so exposed must be stifling a chuckle.  Or maybe not.  But I’m going to pass along this news to you nevertheless.

If you’ve paid attention to the news at all you’ve probably heard Republican politicians rallying support to “take back our country.”  (By the way, they’re not talking to American Indians.)  Ever wonder just who (whom?) it is that they believe took our country?  Well, Jon Stewart has divined that those who stand accused, although known by a host of other names, turn out to all be Americans.  Yes, Americans: people from America!  From these United States!  Of America!  Who knew?

And, when some Americans exercise their right of peaceful assembly to protest this “taking” those politicians praise them for their patriotism, while other Americans who do the same thing are castigated for so doing, and in fact castigated by many of the people who had originally whipped up the fervor for the taking…back, of our country.  Oh, heck, click the pic, he explains it funnier than me. 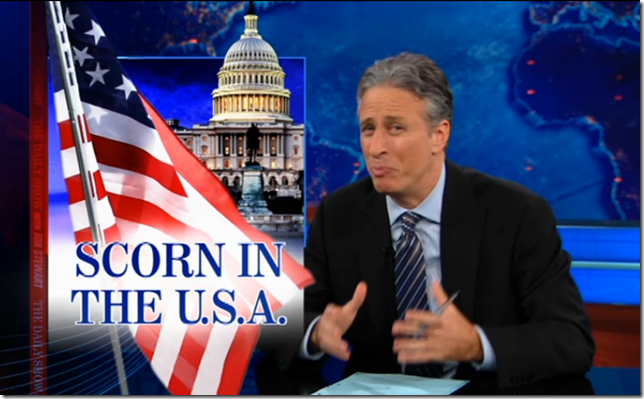 Thanks to Comedy Central and The Daily Show.

2 thoughts on “Taking back our country…from Americans with whom we disagree: it’s the New American Way”