The PGA Tour is here in the Houston area this week for the Shell Houston Open, which has become a pretty nice stop for the pros the week before the Masters in Augusta, 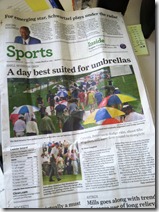 Georgia. The Redstone Golf Club’s Tournament Course is set up to mimic the conditions at Augusta National, and the Houston Golf Association pitches the tournament as a great way for players to practice playing in Augusta conditions; it also provides the last opportunity for a player who’s not already in “the first major” tournament of the year to get a last-minute invite if he wins at Houston.

It’s a big deal locally, and the sports section of Houston’s Leading Information Source devotes many pages to promoting the event in advance and then covering the crap out of it when it arrives: two-thirds of the front of today’s sports section is Shell Houston Open stuff, and there’s more inside. 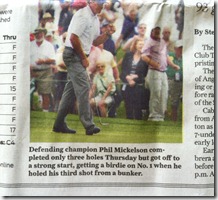 efending SHO champion Phil Mickelson during yesterday’s rain-shortened first round, where the cutline tells me Mickelson “got off to a strong start, getting a birdie on No. 1 when he holed his third shot from a bunker.”

Then I wandered to the top of the page, where in building a straw man to make some point about Charl Schwartzel, who was playing with Mickelson and Fred Couples Thursday, columnist Jerome Solomon tells me that Mickelson “dropped a 22-foot putt for birdie on the first hole of the Shell Houston Open.” 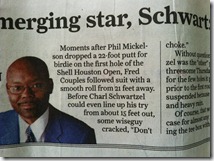 Huh? I shook my head, and it made that clunky sound of metal rattling around, like Yogi Bear’s did when he got confused. I re-read Solomon’s lead, then I re-read the cutline…then I re-read them both again, just to make sure. Then I looked more closely at the picture, and saw that Mickelson was holding his putter and making the triumphant “I sank it!” gesture. And then I measured: 12 and a half inches away from one another, on the very same page of the paper, and they can’t get the story straight about what the defending champion did on his third shot of the golf tournament.

When I got to a computer it took 45 whole seconds (at PGATour.com) for me to find out that Mickelson drove into a fairway bunker leaving 177 yards, his second shot ended up on the green, and he sank the putt from 22 feet for the birdie. So Solomon’s story was right, the cutline writer was wrong, and the people who layed out and proofed the page were either still suffering rodeo hangover or distracted with dread at the fact that the Astros start their season next week.