(I did not see this coming…)

It has been great fun to watch the political circus play out around last week’s revelation of Mitt Romney’s campaign gaffe—or to put it another way, that chance for the rest of us to hear the truth Romney tells his supporters behind closed doors.  The good folks at The Daily Show even took a good-natured little poke at their friends at Fox News Channel for their contortionally-magnificent defense of the Republican Party nominee: “Let me sum up the message from Bullshit Mountain, if I may: this inartfully-stated dirty liberal smear is a truthful expression of Mitt Romney’s political philosophy and it is a winner.”  Click the pic for the whole beautiful report.

This is the core of Bullshit Mountain: the 49% entitlement society Obama enables.  That is the core of the Bullshit Nation fiction, that somehow only since Obama, the half of Americans who love this country and work hard and are good have had the fruits of their labor seized and handed over to the half of this nation that is lazy and dependent and the opposite of good—I’m sure there’s a better term for that.  Now, in that 49% [Sean] Hannity is including those on Social Security and Medicare, or as I like to call them, his audience.

Thanks to Mashed Potato Bulletin for the heads up.

Today’s the day we can celebrate the first anniversary of the demise of the “don’t ask don’t tell” policy that pushed 13,000 homosexual soldiers, sailors, airmen and Marines out of the armed forces of our country and forced untold thousands of others to lie about their sexual orientation in order to continue to serve.  How has the republic fared?

You’ll recall that some opponents of the repeal warned of dire consequences should we choose to stop discriminating against homosexuals who wanted to serve their country; well OK, let’s assess the fallout now, a year removed from the heat of the moment.  Nathaniel Frank today in Slate:

During the debate over “don’t ask, don’t tell”—which ended one year ago this week—Sen. John McCain insisted that ending the gay ban would do “great damage” to the military, and the commandant of the Marine Corps said it could “cost Marines’ lives.” One think-tanker agreed that we’d be taking “a risk with our lives, property and freedom.” Another declared breathlessly that, “ultimately all of civilian life will be affected.” Then there was the dire prediction that one-quarter of the military, or 500,000 troops, might quit in protest.

A new UCLA study, which I co-authored with other academics including military professors from all four U.S. military service academies, has assessed whether ending the gay ban has indeed harmed the armed forces. It hasn’t. Our conclusion is that ending the policy “has had no negative impact on overall military readiness or its component parts: unit cohesion, recruitment, retention, assaults, harassment or morale.”

But we found we could go beyond that: We can also report that after the military ended the gay ban, the institution itself improved, and not just for gay people but for the overall force. Lifting the ban, we found, improved the ability of the military to do its job by removing needless barriers to peer bonding, effective leadership and discipline.

And I believe that ending policies and practices that discriminate against homosexuals will have the same effect in other areas of life as it’s had for the military, because I believe most American men and women, despite the teachings of some religions to the contrary, know in their hearts that it’s the right thing to do.

Mark your civil rights calendar: the gay marriage issue could get to the Supreme Court before the end of the current term.

Years ago I was a political junkie, but I kicked it. Turned out it was pretty easy to get the political process monkey off my back when the campaign content and tactics got so distasteful that I couldn’t bear to listen. But some things come back easily, in the right circumstances. 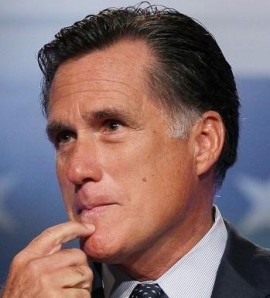 The “hidden video” news revealing Mitt Romney in an unguarded moment in his native environment—among the wealthy—expressing his apparently-honest feelings about a large portion of his fellow citizens left me shaking my head and imagining the effect on voters. Even if what he said was right—and mostly it’s not—demonstrating that contempt for the poor and the elderly, who make up most of those who owe no federal income tax but still pay plenty of other taxes, isn’t going to help Romney with his likeability problem. Today’s revelation of another video clip from that same fundraiser—in which Romney asserts that Palestinians (apparently, all of them) “have no interest whatsoever in establishing peace” with Israel—and the promise of the full video still to come, makes you grateful to live in a time when everyone with a phone is a potential hidden camera.

Romney is right about the fact that most people, on both sides, have made up their minds, and the outcome depends on the choices of a small portion of voters. The experts haven’t had time yet to gather data on how Romney’s truth outbursts in a Florida fundraiser will affect those undecided voters, but that data will get put into the mix along with this very interesting analysis of the polling up to this point which concludes that “Given where the election is being contested, however, the most likely outcome is that Obama wins enough tipping-point states to eke out a victory.” I can hardly wait for the debates!

I really couldn’t think of anything, either…thanks, Calvin and Hobbes and GoComics.com.