The Houston Chronicle is heckled within these walls as “Houston’s Leading Information Source” for two sarcastic reasons: that’s what it proclaimed itself to be for many years in a local advertising—er, excuse me, branding—campaign , and since the other, better local major daily was bought and smothered—er, excuse me, closed and had its assets acquired—by the Chronicle 20 years ago it’s only had local television and radio stations to compete against, and the less said about their journalism the better.  Yet today I come not to bury the Chron but to praise it, for the first Pulitzer Prize in its 114-year history.

The winner of the 2015 Pulitzer for Commentary is Chronicle Metro columnist Lisa Falkenberg, “for 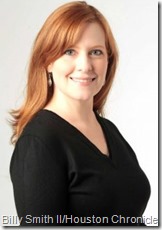 vividly-written, groundbreaking columns about grand jury abuses that led to a wrongful conviction and other egregious problems in the legal and immigration systems.”    In its story on her award today the paper puts Falkenberg’s series in perspective:

Falkenberg was awarded the prize for a series of columns she wrote about Alfred Dewayne Brown, who was condemned for the killing of a Houston police officer, a crime he very likely did not commit.

From documents leaked to her by sources, or obtained through court records and Freedom of Information Act requests, Falkenberg revealed how a witness, Brown’s former girlfriend, who could have provided him with an alibi, was threatened and intimidated by a grand jury into lying on the stand. She provided the key testimony that put Brown on death row.

She pulled back the curtain on the secretive Texas grand jury system, allowing a glimpse into the workings of the panel that indicted Brown. That panel, Falkenberg revealed, was headed by a Houston police officer.

And she documented how phone records placing Brown at his girlfriend’s apartment at the time of the crime which were in the hands of prosecutors were never handed over to his attorneys as required by law.

Ten years after being sentenced to death, Brown was granted a new trial. And as Falkenberg wrote just last Sunday, he is still waiting.

More to the point—albeit one the paper chose not to mention in its own story—Falkenberg’s series on Brown is credited with the push in the current state legislative session to do away with the “pick a pal” grand jury selection system, which she argues is at the heart of the problem that has Browne in jail for a crime he probably did not commit.  Way to go, Leading Information Source.