Two weeks.  It’s been almost two weeks now since Major League Baseball Commissioner Rob Manfred issued his report finding my Houston Astros guilty of cheating in 2017 and 2018 for using technology to steal signs from their opponents, and only now has the first of the 2017 Astros manned up to make a substantive comment.  It’s a now-former Astros player, and a pitcher at that, so it’s a guy who conceivably wouldn’t have been involved in stealing signs and sending signals to the batters but he might have been, and he reportedly did not elaborate on what his own role in the operation was (or was not).  But still, good on you, Dallas Keuchel.

Keuchel signed with the Atlanta Braves as a 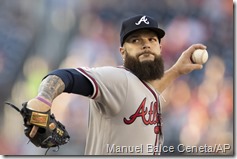 free agent in 2019 and just last month signed with the Chicago White Sox for this year, which is why he was at “Sox Fest” in Chicago on Friday and was asked about the cheating scandal.  Unlike all of his former teammates, including Jose Altuve and Alex Bregman who refused to admit or deny involvement or express any remorse when questioned during an Astros fan event one week ago, Keuchel responded.

“First and foremost I think apologies should be in order for, if not everybody on the team,” then himself, Keuchel told reporters during a scheduled media session. “It was never intended to be what it is made to be right now. I think when stuff comes out about things that happen over the course of a major-league ball season, it’s always blown up to the point of ‘Oh, my gosh, this has never happened before.’ ”

Keuchel wouldn’t go into detail, but he implied other teams had similar schemes during the 2017 playoffs, saying, “Everybody’s using multiple signs. … It’s just what the state of baseball was at that point in time. Was it against the rules? Yes it was. I personally am sorry for what’s come about the whole situation. It is what it is and we’ve got to move past that. I never thought anything would’ve come like it did. I, myself, am sorry, but we’ve just got to move on.”

It’s not sackcloth and ashes, but it’s a start.  Major League Baseball investigated and concluded the Astros cheated; so far not a single person associated with the team has said that the commissioner’s office is wrong, that the Astros are not guilty of the charge.  Not the manager or the general manager, who were both fired for not stopping the cheating; not any of the players who are accused of having been behind the scheme.  No one.  The owner said that once the players get to spring training next month and all have a chance to discuss how to handle this, they will apologize.  Yeah, that sounds like it’ll be pretty sincere.

My bet is the players are going to be plenty sincere when they agree with one more thing Keuchel told the Sox fans Friday: that what is really unfortunate is that former Astros pitcher Mike Fiers violated the sanctity of the clubhouse when he went on the record about the Astros cheating and sparked the MLB investigation.

“That’s a tough subject because it’s such a tight-knit community in the clubhouse,” Keuchel said of Fiers. “In baseball especially, you’re playing 162 games in the regular season, plus spring training and the maybe in the playoffs if you’re lucky, so you’re pushing 185 (to) 200 games. It sucks to the extent of the clubhouse rule was broken. That’s where I’ll go with that, I don’t have much else to say about it.”

But then later, he added, “A lot of guys are not happy with the fact that Mike (Fiers) came out and said something. But at the same time, there is some sorrow in guys’ voices — I have talked to guys before. This will be going on for a long time. I’m sure in the back of guys’ minds this will stick forever.”

Not just in the players’ minds, you know: people are not going to just forget that these Houston Astros cheated the year they won the World Series, no more than they’ve forgotten the way the Chicago Black Sox colluded with gamblers to fix the outcome of the 1919 World Series.  And no, I don’t think that comparison is over the top.

Keuchel’s feeling that “It is what it is and we’ve got to move past that” is understandable, and true to an extent.  It’s hard to admit you did wrong, and it’s natural to hope we can all give a tacit nod without the guys who broke the rules having to say so in so many words.  They want to move forward, and so do the rest of us.  But we can’t move forward and start rebuilding trust if “we” don’t acknowledge the bad thing that has happened, and in this case by “we” I mean “you.”  I need you to say to all the rest of us that you acknowledge you intentionally broke the rules, and that you’re sorry for doing so if you really are, and that you’ll try to do better.  Then, we take the first steps of moving on.

Just don’t expect a lot of sympathy for having been “victimized” by a guy who broke a clubhouse rule to come clean about the team cheating.