Those first few strands of garland on the shopping center signpost the week before Halloween could be innocent enough, and the early signs that the local nursery is saving space for a lot of trees can be misleading.  But there’s only one explanation for the sudden glut of reports of controversy over “holiday” trees at the statehouse and proposed changes to the lyrics of Christmas carols: Fox News Channel has cranked up its reports on the War on Christmas.  And I do mean crank.

Jason Linkins notes that FNC is reporting a major victory on behalf of Christmas in this on-going clash, a phantom battle that is high high high on the list of the stupidest things ever to be the cause of wasted breath.  It’s another asinine cry for attention from a pampered majority of Americans who inexplicably feel threatened by any attempt by government or business to recognize that there are Americans with other beliefs that deserve respect, too.

For most mainstream Christians, the Yuletide season is one in which enormous accommodations are made to those who practice the Christian faith. You get time off from work, and schools get out so your kids can visit family, and on every block, there is an illuminated reminder that Christmas has arrived. You’ve probably noticed that this began about mid-October.

No holiday is as well accommodated in America as Christmas. It is perhaps one of the best celebrated religious holidays in the history of mankind.

Yet these people are peeved because some choose to wish others “Happy Holidays” instead of “Merry Christmas,” even if only for crassly commercial reasons.

…the continuing use of the term “war on Christmas” to describe the reaction of people who do not receive full validation of their religious beliefs from cashiers 100 percent of the time is still a grievous insult to people around the world who are legitimately persecuted for expressing their religious faith, and who look to the way religious freedom is accommodated in America with envy.

And well they should, for they recognize that the Europeans who settled America were people who fled religious persecution in search of religious freedom.   Of course, the fine folks at FNC like to pull that plum from the pudding and stick it in the eye of the Christmas-haters, claiming that “religious freedom is on the rocks” in the land of the Pilgrims.  I leave it to Jon Stewart to set that straw man on fire (click the pics for a two-part pertinent and amusing holiday-themed retort): 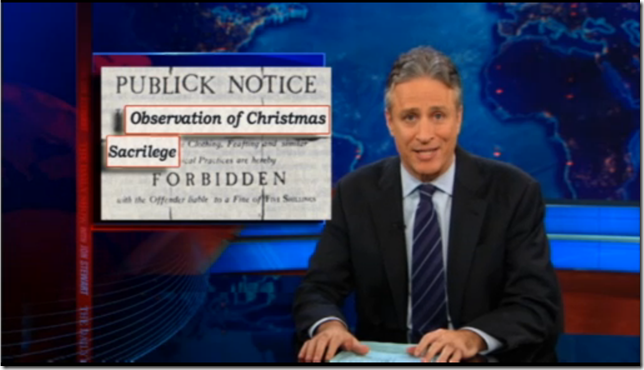 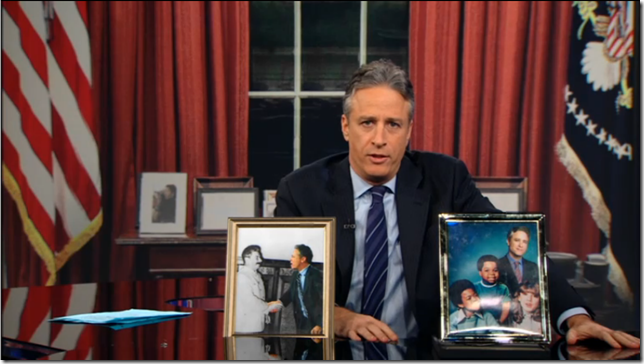