I’m not the most cynical person around when it comes to the practice of journalism today…really, I’m not. If I was completely cynical about what passes for a lot of the journalism being published these days—if I believed it was a lost cause, a total sellout to the evil forces of what David Shaw called “the four horsemen of the journalistic apocalypse: superficiality, sensationalism, preoccupation with celebrity, and obsession with the bottom line”—then I wouldn’t bother talking about it at all; there’d be no point. I feel there’s still some good in there, or can be, perhaps in the way that Luke Skywalker could feel the Anakin Skywalker that still remained within Darth Vader. I must still try to turn it back to the good side of the Force.

Many of my contemporaries in the post-Watergate generation went into journalism with an idealized and inflated vision of what journalists could do, and we really did (and do) believe in the vital importance of the role of journalism as a watchdog over government power, a role that was understood and respected by the Founding Fathers to a far greater extent than it is by today’s civic and government leaders and a growing percentage of the general public. But without doubt, the excitement of being a reporter was part of the attraction, too.

Jim Romenesko linked to a recent Brain Pickings post highlighting a 1940 Encyclopedia Britannica film from the Your Life Work series, which called the film an “idealistic manifesto for the deeper ethos of journalism as a calling.” Yea…and it’s funny to see how they were selling it to the pre-World War II student body; enjoy… 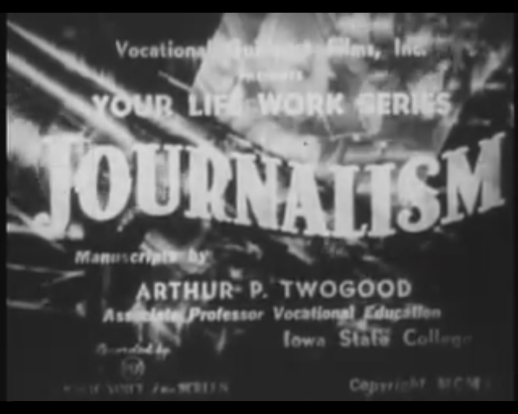 While you’re at it, take a look at this video that fights against itself trying to disprove the idea that a pretty girl in a bikini is not necessarily a distraction to effective instruction.

And when you’re done, nose around Brain Pickings…some interesting stuff there on the notion of creativity.