Recently I stumbled on a relatively new Website that grabbed my attention by being different.  It’s called Upworthy, and it bills itself as a social media site with a mission “to help people find important content that is as fun to share as a FAIL video of some idiot surfing off his roof.”  That’s something worth checking out.

I have been for a week now, and decided to pass it along to you and recommend you do the same.  It’s continually updated, although I can’t tell yet if there’s a real schedule for updates or not, and has enticed me with fun and interesting images and clever text it hopes I will click.  It has a sense of humor and a progressive/liberal political point of view, at least what I’ve seen so far does…but then, it does seem to be the work of young people (and you know how they can be!).  They’re tilting at the windmill of an Internet composed of the following: 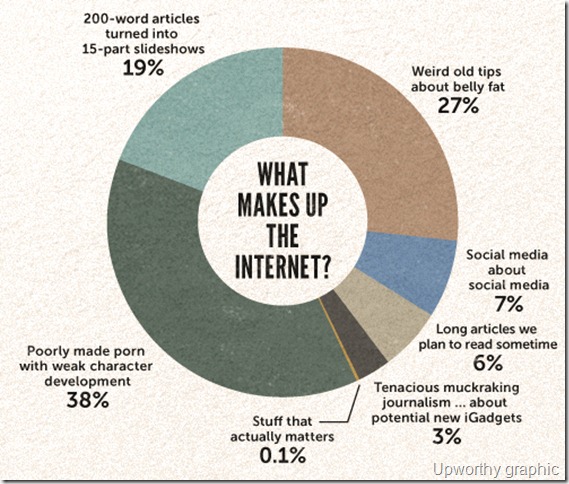 I agree with their premise that “things that matter in the world don’t have to be boring and guilt-inducing,” and give them credit for trying to prove the point.  Give Upworthy a look yourself.